Ramunade is a hidden character in Gacha Life who later appears as a preset and battle unit in Gacha Club.

In Gacha Life, he can be found in the Slime Forest. Like many of the hidden characters, he has an odd speech pattern. In his case, most responses are a lot of "w"s followed by a word or two. Ramunade's relationship is 'Friend', unknown to whom. His personality is 'Lazy' and his occupation is an artist. His preferred gift category is Clothes.

Supposedly, in real life, he is one of Luni's best friends. 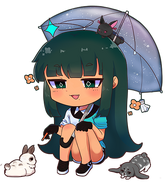 Ramunade, as seen on gacha.club 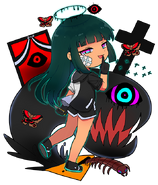 Ramunade, in the slime forest

Shadow Ramunade's card art in Gacha Club. It was later replaced by Meguna for an unknown reason

Community content is available under CC-BY-SA unless otherwise noted.