Unknown
Lucas Lee is a water unit, who made his debut in Gacha Resort as a 6-Star Unit. He has also appeared in Gacha Life and in Gacha Club as a unit. He was created by Luni.

The Magical Luni variant can be found in Gacha Life and is one of three characters that can only be accessed by the Level 100 Portals. This is Luni in Magical Boy form who hopes to defeat all evil monsters in the world. His powers include flight, summoning a magical duck that's big enough to ride on, and a special attack called "Kawaii Duckie Blast!" Senpaibuns is his Magical sister, though whether this is biological or honorary is unclear. His preferred gift category is Adorable. 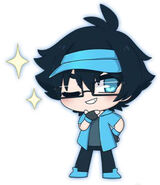 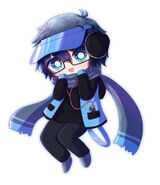 Shadow Luni as a unit in Gacha Club

Corrupted Luni, as seen on gacha.club
Community content is available under CC-BY-SA unless otherwise noted.