Green Jester is a Wind unit in Gacha World. She can be found in the second area of the Gacha Woods where she tasks the Gacha Summoner with finding her ball. She also appears as a recruitable character in Gacha Resort and Anime Fidget Spinner Battle.

She was created by Luni.

Her special attack is 'Rolling Jester', Green Jester will jump on her ball and rolls over a column of up to two enemies. She has no leadership skill.

Green Jester is a resident of Gacha Kingdom, which was not just far the Gacha Woods. As the kingdom's jester, she has quite the duty to entertain the people who reside in the kingdom.  Her most prominent instrument is a large rolling ball, where she can roll the ball with both her feet standing and travel with it without failure.  Such an exquisite talent.  She has quite the good acrobatics that would make her one of the known flexible humans in the world's Gacha Kingdom

Green Jester has also a sense of humor that is quite good, to the point she can match Gacha-Robo's puns making the entertainment for people be more hyped and exciting.  Gacha-Robo and Green Jester always compete with one another for entertainment but they always end up with neither side on the winning hand, hence being equal rivals when it comes to entertaining the residents.

One time, Green Jester rolled her ball and suddenly lost track of direction making her leave the Gacha Kingdom temporarily by accident.  With also the ball missing the Jester has nothing to do but juggle up her small toy balls to catch the attention in case there would be a wanderer.  And that was the Gacha Summoner after assisting Gacha-Robo with missing parts.  Now, the Gacha Summoner and Fairy Ellie will comply with Green Jester's request on looking for the rolling ball.

"Ha! Get ready to get squished!" - Green Jester's skill quote in Gacha World

"How do you like my tricks?" - Green Jester in Anime Gacha 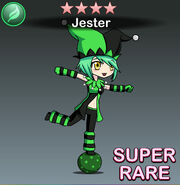 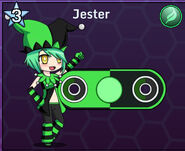 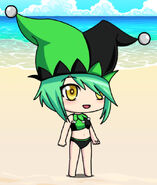 Green Jester as she appears in Gacha Resort